Weekend Adventures: On the Road to Arizona

Greetings from sunny Arizona! Stay tuned for a blog post of the National Lampoon-style trip west. I planned to include photos in that post & this one, but my phone bit the dust and I lost all the photos I did not back up. Perks of traveling!

In the meantime, here's a few shots from the past few days, courtesy of my new phone:

Hiking in the Ozarks is a much different experience than Illinois. While there are some neat hikes in that northern state (Mathieson State Park, for example!), nothing beats the hills of Missouri. I ventured out to Roaring River State Park, just outside Cassville, Missouri, for my first "official" hiking adventure since the move.

I originally planned to hike the Devil's Kitchen trail, but ended up hiking a different one! A must-see at the park is the picturesque trout stream -- stocked full of trout from the hatchery -- and Roaring River Spring. 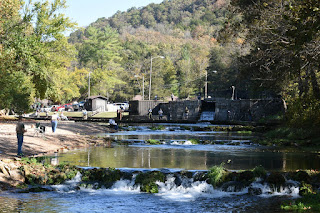 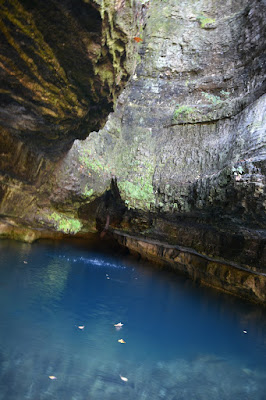 I wanted to get an aerial view of the spring and hatchery, so I climbed up Deer Leap trail (just .2 miles long). On the way up there, I saw the trail sign for Fire Tower trail (a more appealing 3.75 miles), so I detoured up the steep trail to see what was up there. I was rewarded with some great views of the changing fall colors and a mostly deserted trail. (I didn't take a lot of photos on this hike -- for a change!) 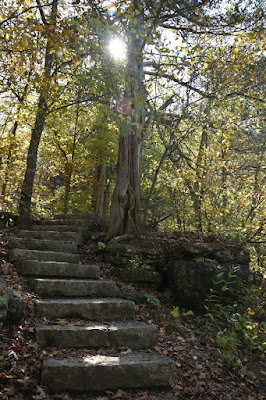 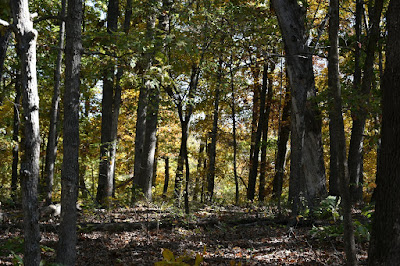 I felt adventurous, and there weren't any signs warning people not to climb the fire tower, so I went up. My brain kept saying NO, but I made it to the top. Built in the 1930s by the Civilian Conservation Corps, the tower didn't offer much of a view; it must have offered a spectacular view before the trees overtook its height.

I also had a reminder that you're never truly alone when out in nature. Even if you don't see them, there are tons of animals around. This big guy caught my eye as I wandered down the trail. I stood and watched him for a while as he worked his way up the tree and out of sight. I grew up with a big fear of snakes, but I've apparently gotten a bit braver now that I'm older. 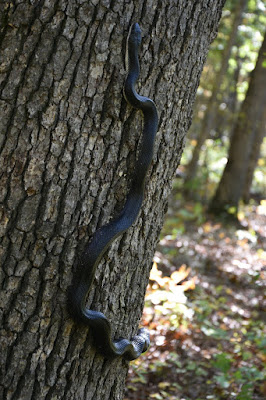 I'm going to try to fit in one more hike before I take off on my next adventure. Stay tuned!

Popping in with an update as I return to regular blogging! It's been over a year since my last post, and since then I've completed a stint in downtown Chicago as a proofreader at a private label design firm, then downsized and packed up my belongings and moved 600 miles south to a temporary location in the Ozarks!

Big plans ahead: most of my "stuff" is in storage and I'm getting organized for a snowbird-style adventure in Arizona. I'm in the midst of planning a road trip through southern Utah. Stay tuned, as I'll photograph and blog my way westward.

In the meantime, check out my updated Etsy shop, which features some of my favorite photographs combined with quotes: Find Your Mantra 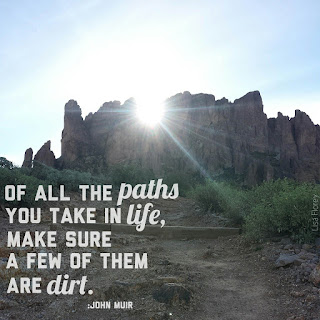 I hate spoilers. But unless you've avoided television and the Internet, you know there’s controversy surrounding Go Set a Watchman. There's debate over whether Harper Lee ever intended anyone besides a select few readers to see the manuscript, and whether it was truly a first draft of what later became To Kill a Mockingbird. And then there’s the uproar over the racism displayed by America’s beloved character, Atticus Finch.

Perhaps what bothers us the most is not that Atticus Finch’s image is tarnished, but that Harper Lee portrayed racism in America from an uncannily accurate angle, and with a helpless frustration.

Without giving away more than the media already has, I gave the book 3 out of 5 stars and recommend it to readers who are interested in an intellectual discussion. If you’re looking for a beach read or something with rainbows and puppies, this isn’t the book for you (but you already knew that).

Keep two things in mind: One, the book was published without any editorial input from Harper Lee and appears to be more of a draft of a manuscript than a final edition of a book (more on this later). Two, let go of any expectations that the book will be anything like To Kill a Mockingbird. While the major players are still there, only their names seem to remain the same (although Scout has mostly morphed into “Jean Louise”). So much for nostalgia.

For me, the main theme wasn’t racism. Yes, that was a big part of the book, and a big shock to the system of a lot of readers -- myself included. However, I disagree with those who thought it was only about racism. I thought it was also about how we see our parents and hometowns one way when we’re children, and how that vision changes when we grow up, leave home, and go home again. But can you really go home again?

As John Steinbeck said in Travels with Charley: “You can’t go home again because home has ceased to exist except in the mothballs of memory.”

I wish Harper Lee was able to tell her side of the story, that she could have worked with editors to shape Go Set a Watchman into the book it should have been -- if that was her wish. As an editor, there were many places where I wanted to pick up the red pen and make notes in the margins. But for all its faults, there are parts where Harper Lee’s voice shines through. I’m glad I read it. I wish I had a book club to discuss it with because there are so many threads of conversations I could pick up from the book.

I suggest you read the book (and read the entire book, don’t stop when you get to the pivotal scene -- you’ll know it when you read it). If you’re the type who doesn’t want the publisher to benefit from book sales any more than it already has, get the book from the library.

Have you already read the book? What did you think?

I've committed to a photo-a-day project for 2015. I may not always post them to Facebook or Instagram, but they'll be collected and archived here on the blog and I plan to print them all out. It's fun to see how the year unfolds. Here's week 26 (halfway through the challenge!):

I've committed to a photo-a-day project for 2015. I may not always post them to Facebook or Instagram, but they'll be collected and archived here on the blog and I plan to print them all out. It's fun to see how the year unfolds. Here's week 25:

I've committed to a photo-a-day project for 2015. I may not always post them to Facebook or Instagram, but they'll be collected and archived here on the blog and I plan to print them all out. It's fun to see how the year unfolds. Here's week 24: